‘Tis the season to be writing papers, cramming for finals, and generally stressing out — or so says about 80% of my Facebook newsfeed. I’m insanely jealous.

I think I have an addiction to academia. I surmise that it started when I was two or three and started harassing my parents relentlessly about how long it would be until I got to go to school. I didn’t even really know what it was; I just wanted to go there. I heard there were books. Faced with having to wait, which is something I don’t believe I have ever been good at in my entire life, I resorted to scribbling on a chalkboard in the basement of our old house while my stuffed animals listened quietly and attentively.

If only my students, during my actual teaching career, had been so quiet and attentive. 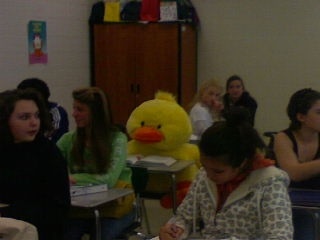 (As fate would have it, though, I wasn’t done teaching stuffed animals) END_OF_DOCUMENT_TOKEN_TO_BE_REPLACED

For my senior colloquium course in college, I had to read this book, The Hunger of Memory: The Education of Richard Rodriguez by (you guessed it!) Richard Rodriguez. In it, Rodriguez talks about being a “scholarship boy” and the opportunities it provided him for a life amongst the gringos. He was given opportunities that his parents (who suffered because of a language barrier, in particular) just didn’t have. He was always concerned, however, that he was just pleasing people and going through the motions, that he wasn’t really as smart as everyone led him to believe. Much of this book examines the concept of duality. For a plethora of reasons, I hated it. Something about the language or his opinion of himself. I couldn’t necessarily put my finger on it, but I just hated it.

Then, a few years later, when I was in grad school, I had to read it again. Twice.

The more I read this book, the more I continued to dislike it. But as I’ve been doing a lot of thinking about my education lately and where it’s gotten me, I keep coming back to this book. Curses! Something about that idea of duality and binary oppositions, that his entire education was something of a sham started to resonate with me.

END_OF_DOCUMENT_TOKEN_TO_BE_REPLACED

I’m taking a break from my normal babble to do a little unsolicited blog promotion. I like reading blogs because I feel like there’s always a lot to learn from other people and often times I find that they offer ways for me to readjust my own perspective. They can be quite educational. There are a lot of great blogs – by people I know and people I don’t – that I could tell you to read. I’m only going to start with three of my personal friends’ blogs, though, because I don’t want to be overwhelming. When I go to a blog, I like to click on other links in the blog roll (a good reason to establish one), so if you haven’t checked out these blogs on mine, please do (all links in this post will open in a new window). If they don’t strike your fancy, feel free to pass them on to anyone else whose fancy they might strike. I just used the word “blog” a lot. Bad writer.

Please note, however, that I can’t do these justice in a short blurb. You’ll just have to check them out for yourself. END_OF_DOCUMENT_TOKEN_TO_BE_REPLACED