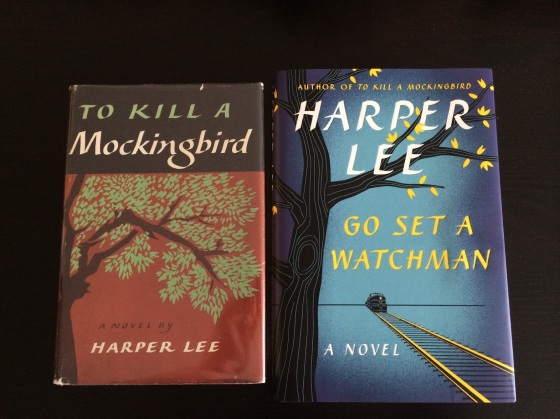 photo by me — these are my books.

If you’ve spent any time in the world (maybe watching the news or scrolling through social media updates), you have undoubtedly heard that Harper Lee, the reclusive author of one-hit-wonder (and one-hit-written, or so we thought) book To Kill a Mockingbird, had a “lost manuscript” that was recently published. You remember To Kill a Mockingbird. You probably had to read it in high school. Scout. Jem. Boo Radley. Tom Robinson. Atticus Finch. It’s a classic, and a much beloved one, at that. While TKAM isn’t really a book about race, per se, it does examine the topic in a way that is very memorable to most people who read it: Atticus Finch, upstanding southern lawyer during the Depression, defends Tom Robinson, a black man who is accused of raping a white woman who lives on “the wrong side of the tracks.” In the end, it’s clear that Tom is innocent and the girl’s own father attacked her, but Tom is still convicted because it’s Alabama in the 1930s and that wasn’t how the world worked. It was barely, if at all, how the world worked in the early 1960s when the book was first published.

I spend a considerable amount of time on the “Bookternet” — the part of the internet that is basically just a whole bunch of book nerds reading, writing, and talking about books and publishing and all that goes along with them. When this “new” Harper Lee manuscript was first announced, it was maybe the biggest thing I’ve ever seen happen to the Bookternet, and though I’ve heard just about every review and criticism of the book in the loosest sense (second and thirdhand accounts that I only halfway pay attention to), I’ve tried to largely avoid and ignore them. This meant staying away from my favorite podcasts and websites for a while so that my opinion would be my own.