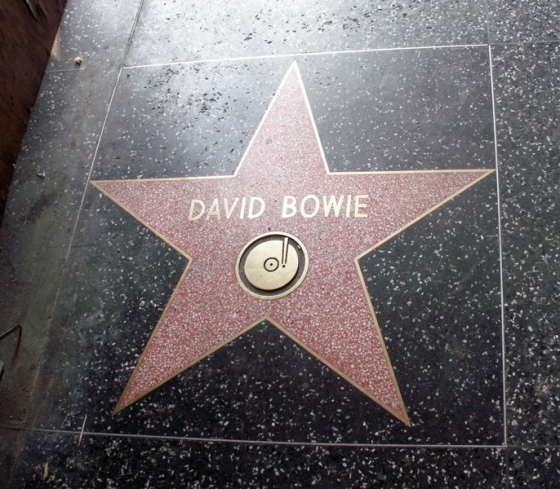 Two of last week’s many unpleasant surprises landed with a boom on Monday morning.

A third surprise, just for me, at least, was how much this news upset me. I have been listening to David Bowie since high school. I know lots of his songs and I like them, but I don’t own any complete albums. I was aware of his innovation and influence, and I’ve seen the Jim Henson film Labyrinth once or twice (in which he plays Jareth, the Goblin King), but never followed his career with the closeness and fervor that a hardcore fan might. Still, the news was upsetting to me. I kept finding myself getting a little teary-eyed about it. [Author’s note: about halfway through writing this post, which took me several days, news broke of a 4th unpleasant surprise: Alan Rickman has also died. It would seem it’s a bad week to be a 69 year old British male performer with cancer that no one knows about.]

After ruminating on it for a bit, I think it’s the enormity of Bowie’s 50 year career — his accomplishments and his ability to transform himself again and again, thus allowing him to remain relevant — that I feel at his loss.

If you have followed an artist for any length of time (I’m thinking in terms of musicians, but I see no reason this wouldn’t be true of all artists), you’ve probably noticed, maybe without realizing it, that one of two things generally happens:

There are positives and negatives to both. With the first case, you run the risk of stagnating, but those who don’t get bored and stick with you will appreciate your consistency. Personally, I feel like this method is a little boring. If you never try anything new, you never know what you can pull off. Even if you just do it the Garth Brooks/Chris Gaines way. But I digress.

The second way gives an artist more freedom of expression and more freedom to try new things. They might not always work, and not everyone is going to like every iteration, but that’s the chance you take to keep it fresh and to keep yourself relevant over time. Think of the great artists who have been around for decades and are still touring and making music. Chances are good that they’re not doing the exact same thing they did in the 70s and 80s. In a review of Bowie’s final album Blackstar, a writer for The Economist noted that “he never became his own tribute band,” meaning that he was still innovating and creating new art, not just reliving the “good old days.”

Maybe the greatest testament to that was that Bowie released an album on his 69th birthday, two days before he died. And he had apparently told someone that he was looking forward to writing a followup. The first single, Lazarus, which begins “Look up here, I’m in heaven…” has taken on a kind of different meaning since his death (many have considered it a swan song, while others have cited his eagerness to start writing again as evidence that he believed he had more time). The video gives me the creeps, but that sound…. good stuff. He was a master of evolving and artists cite him time after time after time as a major influence and inspiration for that reason. I’m sure if you ask a major Bowie fan which of the Bowies is their favorite, they probably prefer some eras to others.

Butch Walker was mostly how I got into Bowie in high school.

Several years ago, a friend and I were out to dinner at Applebee’s, which was, inexplicably, playing only David Bowie songs. We thought that was kind of weird, but over the course of the hour or so that we were there, it occurred to me that when you listen to them in a chunk like that, whether you’re a fan or not, you can’t help but to notice the way he completely embodied musical innovation and evolution.

And it wasn’t just music. David Bowie was into art in many forms. He was iconic in the fashion world, something that was highlighted when he stepped up to judge the fashion “walk-off” in the movie Zoolander. Also helping that along was his nearly 25 year marriage to model Iman. He read like nobody’s business (even rumored to read at least one book a day). In 2013, he published a list of his 100 favorite books of all-time on his Facebook page, and that has resurfaced in recent days (you can also listen to this podcast about them), along with this, which might be one of my favorite David Bowie pictures. It’s taken me 5 days to realize that it’s mostly the jeans … he never wore jeans (something he discussed on Fresh Air with Terry Gross).

The Fresh Air interview (which was from 2002 or 2003) was interesting in that Bowie shows how great a fan of art he was and how much that has influenced him. As I listened to it the other day, I was struck by a few things. First, let me just put this out there: David Bowie was in a mime troop as a young man.

Okay, now that that’s out of the way, the interview is really interesting. I recommend giving it a listen. Bowie shows his intelligence and a broader understanding and acceptance of things. He also revealed that his favorite part is planning the show, but he didn’t really like to perform — he would do it, but it wasn’t what he loved. He loved to write and create the show. Following from that, he also revealed that when he was a young boy, what he really wanted to do when he grew up was to write musicals — something he did eventually get the chance to do. Also of note: he discusses how Ziggy Stardust was 18 months of his [at that time] nearly 40 year career, but it’s what he feels people define him by, and he didn’t necessarily want that (see: previous paragraphs discussing reinvention).

Outside of the art world, David Bowie also got things done (because he knows when to go out, and when to stay in…) in the tech world. This was something I didn’t know, and I am completely fascinated by it. As this NPR article notes, he released a single online in 1996, and it got 300,000 downloads (think for a second about your comprehension of the Internet in 1996. Did you ever see it being a place for music to be shared and acquired? Bowie did). Have you ever watched a streaming concert on Yahoo? Turns out Bowie did a cybercast of one of his shows in 1997. The Internet was slow, though, so in 1998, he launched his own Internet service provider, BowieNet. Check out the article to read more about it, but it was really ahead of its time, with many users stating that Bowie and some of his friends would be online with them, giving them access to celebrities as real people in a way we wouldn’t really see until Twitter. In the late 90s, he also worked on a video game, writing the soundtrack and making an appearance in the game itself.

Why is any of this important? He had a fundamental understanding of how technology and art (particularly music) would merge as digital media way back in the mid-90s when most of us knew the internet only as a way to pop into chatrooms and A/S/L? for a little while until someone needed to use the phone.

The below 1999 interview is also really interesting, but there are buttons there where you can skip ahead — definitely listen to him discuss how “the Internet now carries the flag of the subversive and possibly rebellious and chaotic and nihilistic and — oh yes it is. Forget about the Microsoft element” while BBC interviewer Jeremy Paxman seems unconvinced.

So my point is this: if you appreciate an artist who has been able to stand the test of time by evolving and not being afraid to try new looks, new styles, etc., you may have David Bowie to credit for that. If you enjoy accessing music on the internet — by download or livestream — give Bowie some credit for that. If not, and you are someone who appreciates art and technology in any form, then you can hopefully see how his death is a loss for the artistic and innovative communities.

All Songs Considered: A Memory

I’m going to wrap it up with this: All Songs Considered (you may have figured out by now that I’m an NPR fan…) did a piece in which listeners called in and shared their memories of a David Bowie song. My hands-down favorite Bowie song is Modern Love (fun fact: the video is concert footage from a 1983 show in Philadelphia at The Spectrum), but that’s not my memory.

During senior week in college, one of our class activities was a night that the school rented out a local club for us, and we all went and drank and danced. I don’t dance, really, but I am a fan of standing around singing along to loud music. I have this memory, toward the end of the night, of standing in a circle with two of my closest friends and a handful of other people I’ve mostly lost track of, and “Under Pressure” came on. I can remember looking over at at my friend as we belted out the last few lines (which Bowie sings), and I still get goosebumps every time I hear them — as recently as 2 hours ago when I heard it while driving home and figured out how I would end this post — because I forever associate them with being 22, excited and sad about graduating from college, and terrified of the uncertainty of where life would be taking us next (it’s fine, most of my best friends from college live within an hour of me now, but it wasn’t always like that and I didn’t know that would be the case 11 years ago).