It must have been somewhere around the time I was in third grade — when the Disney Channel was something you had to pay for and my parents got it for us for a year — that I fell in love with The Mary Tyler Moore Show. With our Disney Channel subscription, I feel like we also got better cable and therefore access to channels like Nickelodeon, which turned into TV Land at night (the details are fuzzy and could be a story of revisionist history). Regardless of whether it was at night on Disney or at night on TV Land, I remember lying on the couch in our basement family room, waiting for The Mary Tyler Moore Show to come on.

There was something I just loved about it, and looking back, I think it was Mary Richards’ independent nature. My third grade teacher (also favorite teacher and the one who most inspired me to become an educator) was the first I’d had who wasn’t married. She lived in an apartment a few blocks away from my house, and something about Mary Richards reminded me of her. I imagined that her apartment looked just like the one where Mary lived: the 60s-style living room that was a few steps lower than the rest of the apartment surrounding it, a tiny kitchen where she made dinner for herself and a friend who, in my mind, looked exactly like Rhoda Morgenstern (Valerie Harper’s free-spirited character).

Over the years, I watched this show any time I saw that it was on. When I got a Hulu subscription a few months ago, I sat and watched seasons at a time. And that’s when it hit me.

What I’d never realized (and I don’t know what child could have) was how far ahead of its time The Mary Tyler Moore Show was. It premiered in 1970, and the back story is this: Mary Richards, age 30 (ahem), breaks off her engagement and moves to Minneapolis on her own, away from her family and friends, and just starts over. When her former fiancé comes to call, she doesn’t take him back. She applies for a job as a secretary at WJM-TV (a very stereotypically female job, of course), but, because the position has already been filled, she’s made associate producer instead. Dreams can come true, kids! 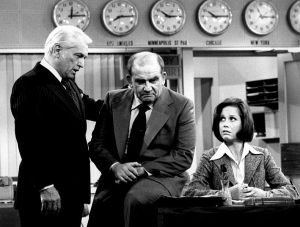 And so Mary finds herself, a proverbial rose among thorns (namely Lou Grant, Ted Baxter, and Murray Slaughter), in the newsroom. Aside from hostess Sue Ann Nivens (played by the brilliant Betty White), Mary is really the only female of note at the station (at least that we see). But what happens? At a time when sitcoms were still showing women as subservient housewives and as little more than baby-makers, Mary learned to hold her own and not kowtow to the men around her (she’s unsure of herself at first, perhaps, but she becomes much more empowered and confident in her role).

She later goes on to become the producer.

And she’s doing this as a single, goal-oriented woman who didn’t settle when she could have (I’m pretty sure her fiance was a doctor, but I could be wrong about that). She lives in a studio apartment, not these luxurious pads we see on TV today that we know real working-class people could never afford. She creates a life with her friends, her job, and whatever else comes her way. Some of the show’s topics were quite taboo for the time — aside from an unmarried 30 year old woman who, surrounded by men, worked hard and was genuinely successful in her career — the show covered topics like divorce, pre-marital sex, and homosexuality. We wouldn’t bat an eyelash at that now, but in the early 70s, that was a big freakin’ deal.

The thing is, though, that when I watch that show, aside from identifying with being a 30 year old woman who is unmarried and focused more on her goals, career, friends and family, and establishing herself, I’m happy to see that many of the things that made it so ahead of its time are now the norm.

There’s still something, though, that I think we struggle with, and it affects different people and industries in different ways: gender equality. The idea that women are weak. Or crazy.

Sure, there are a lot of men who are overt about their misogyny. There are a lot of men who, though not necessarily misogynistic, don’t respect women. Some are more obvious about this than others. But I think that any female reading this right now can think of at least one encounter with a man who tried to work around her because, whether personally or professionally, he clearly had no respect for what she was doing or whatever command she had. I can think of male friends and family members who have done this to me — hopefully unknowingly — in what I can only imagine is an attempt to completely dominate a situation. Not cool. Damaging, actually.

It’s sad to see women working so hard and doing such a fantastic job at whatever it is they’re doing, and then some of these men, knowingly or not, just laughing it off as if to say, “well, that’s cute that you tried, but let the big boys do the heavy lifting.”

I have been fortunate that I have never had to work with any men like this regularly (if you don’t count a couple of students). But I’ve dealt professionally with parents and other “passers-by” who definitely seemed to come from that school.

And here’s the kicker. Not all of them are men.

There are plenty of men out there to strong-arm women, suggesting that they don’t know enough to make decisions or they should listen to and follow a man’s “more informed” opinion. There’s so much undermining going on, yes. But if there’s anything that Mean Girls underscored for us (much later than MTM), it’s that girls are terrible to each other too, and we’re part of our own problem.

In an attempt to be taken seriously and treated like equals, we start stepping on each other in the process. An arms race of sorts. If my success is to your detriment, then you will make me pay. It’s not right. But alas.

On MTM, Mary deals with this as early as the pilot episode when Rhoda wants the apartment Mary is moving into and bullies her in an effort to get it. (Don’t worry, Mary doesn’t give in.) I’m sure there are other examples of women’s rivalries and such that aren’t coming immediately to my mind (Rhoda’s love interest being more interested in Mary is kind of getting at the jealousy issue, but not in the same way at all).

And for all the bullying Rhoda does in the first episode, by the second episode, Mary and Rhoda are the best of friends. What I want to know is what happened in between. How did they get there? How do we get there?

What would Mary do?

The real MTM is a good bit darker than her television counterpart (she once tried, unsuccessfully, to assist her brother with his own suicide, for example). But Mary Richards? She would fret. She would talk it over with Rhoda (or Phyllis… maybe. Or possibly Mr. Grant. Or someone else entirely). She’d probably fret some more. Then she’d roll her eyes and start toughening up because Mary Richards won’t get ahead by taking someone else’s crap. And she. is. a success, dammit!

If she managed to hold her own in a newsroom full of men, I can’t believe another woman would get the best of her. Ultimately she’d recognize (especially as someone who works in the communications field) that communication is key. She’d have an open and adult conversation, and that would be that. No one analyzes the conversation for days afterward. No one over-thinks the things that were said or comes back with questions. No one finds it impossible to make eye contact because she’s so uncomfortable. For all we know, no one is even acutely aware of her awkward hands or her face turning red with stress and anxiety. Nice and neatly-packaged sit-com wrap-up.

She makes it look so damn easy, doesn’t she?

But we are real, so what are we to do to completely level the playing field? Is that even possible?

Now if you’ll excuse me, I’ve got to go in search of a place to spin around in a circle and toss my knitted hat into the air. It’s a start.