It’s unclear to me why someone took this picture, but it’s kind of perfect for my purposes here! (Image via MorgueFile)

When I was in college, one of the school’s traditions was to hold a big Thanksgiving dinner the Thursday before Thanksgiving. You signed up for a table with your friends, and when you got to the dining hall, it was transformed into something magical and fancy (read: the tables had linens). Each table got its own turkey and all the dressings, and had a professor or two assigned to it. Those professors would serve you dinner. Such a great tradition.

It was over one of these dinners that a friend told me one of the Thanksgiving traditions in her house, and it’s one of the greatest I’ve ever heard. Every year they go around the table and toast to something dysfunctional (that year it happened to be Nick Lachey and Jessica Simpson’s failed marriage). Every year I want to make this a tradition in my house. But we don’t have traditions here. We’re savages.

I was going to write a “things for which I’m profoundly thankful” post like everyone else because… well, there are a lot of things for which I am profoundly thankful (my family and friends, a job I love, and the fact that my parents still allow me to live in their house for free even though my dad hasn’t seen the inside of his garage since I had to move back almost five years ago… but I digress).

Instead of doing that, I want to offer you a more humorous alternative to the traditional toast of gratitude. So if you’re going around the table and you want to toast to something other than good health, here are a few toasts that I’m proposing. 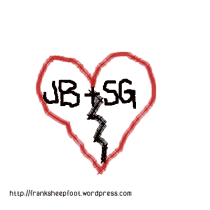 It smells like hair products and sadness and you just know Biebs is sitting in a hotel room somewhere writing passive aggressive Instagram captions or tweets or… something. It’s also 100% possible that he’s totally losing his shit on the paparazzi.

Who knows if these two are actually done or not. It’s starting to get tiring. First she storms out of a restaurant. Then they’re supposedly partying together after the AMAs. Blah blah blah blah.

So here’s to you, Jelena.

Speaking of things that are exhausting. I heard Taylor Swift is dating one of the members of One Direction, which seriously alarmed me since I had only just heard that she and Connor Kennedy were, like, so happy and stuff. She even had Ethel’s seal of approval and how the hell are you gonna play Ethel Kennedy like that? And also, in the last year I feel like Taylor Swift has maybe dated everyone except Justin Bieber. Girlfriend gets around.

Can’t wait to hear what kind of thinly veiled accounts of all of this come out on the next album! Just kidding.

I still don’t know why this exists, but man, am I glad that it does. Or did. Little Face Mitt brought joy to all of us this year, and for that, we should be grateful.

I had a field day — and absolute field day — when I found out that Nickelback lead singer Chad Kroeger and “Badass” Extraordinaire Avril Lavigne got engaged. There are few “musical” acts I despise more than Nickelback and Avril Lavigne. So I keep imagining all of these conversations that they must have with him SCREAMING EVERYTHING HE SAYS EVEN WHEN IT’S SUPPOSED TO BE GENTLE and her replying, “Chill out. Whatcha yelling for?” Even the softer side of Chad needs to calm the hell down.

I’m toasting to an awful lot of Canadians this Thanksgiving. Cheers to our friendly neighbors to the north!

I’d like to propose a toast to Tom Cruise’s crushed soul because I don’t feel like we’ve forgiven him anyway for that time he jumped on Oprah’s couch and screamed about how much he loved Katie Holmes. Sorry about that time she went on the sly and divorced you days before your 50th birthday party. At least you’ll always have Suri’s Burn Book.

And now that Stepford Katie is just turning back into regular Katie, I’d like to raise my glass a second time. Here’s hoping she starts talking a lot to James, Josh, Kerr, Michelle, and Grams and we can finally get the Dawson’s Creek reunion that I’ve been dreaming of for the last 9 years. I mean… wait. What were we talking about?

I can think of fewer things more dysfunctional than Teresa and Juicy Joe. Keep living the dream. And much as I might love hearing 6 year old Milania tell Gia, “You’re not a cooker. You’re a hooker!” … I’d like to toast to your exit from reality television. It’s just time.

These two surprised me the most this year by being exactly where I wanted them to be: quietly off in la-la land. Cheers to your continued oblivion!

I feel like Snooki isn’t even the same person. No more hair bump. She’s slightly less orange. She’s not wearing 22 gallons of makeup. She wants to rebuild the Jersey shore (hopefully she means the actual shore and not the series itself). And, perhaps most disturbing of all…. she’s a mother.

Cheers, baby. I just don’t even have words.

#10: The Absolute Worst and Most Annoying Black Friday Commercial in the ENTIRE History of Mankind

Cheers to it almost being Black Friday because every time I see this commercial, a little piece of my soul dies with every second it takes me to find the remote. I only wish I were being dramatic.

#11: Less than a month until the Apocalypse!

You know. If you buy into that in everything, then cheers to impending doom!

What are you toasting to on Thanksgiving?