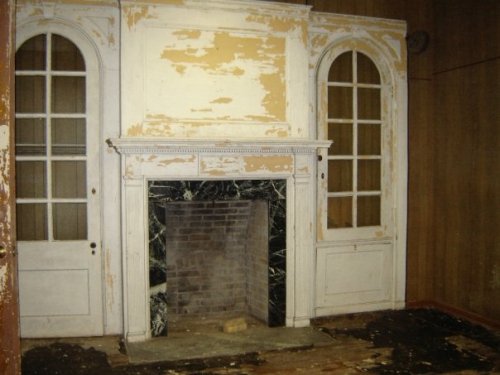 Abandoned places have, for whatever reason, always fascinated me. There’s something about what used to be and what is; something about the breakdown. What makes people stop caring for a place? This probably began with a building in my hometown that’s been largely abandoned for many years, Highland Hall (seen in the picture to the left). I could look at photos of abandoned places for hours and never get tired of it. In recent years, I’ve developed a strong curiosity about the abandoned portion of the Pennsylvania Turnpike. Since it’s so close to where I grew up, I’ve got a trip in the works there for this fall.

So when I was in church this past Saturday evening and the sermon began with a story about an abandoned church, I was hooked. In the story, a boy and his grandmother are walking past the church, which is now in ruins, and he asked her what happened to it.

“What you see here is the end of an argument,” the grandmother replied.

Being an English nerd, an introvert, and someone who generally just thinks too much, the metaphor was already solidified in my head long before she drove the point home. Two sides don’t see eye to eye and, instead of working through it, they give up. The discrepancy or disagreement gets in the way. Everything shared and everything built is laid to ruins. That’s the end of the argument.

This was all very timely for me as I’ve been thinking a lot lately about something my grandmother told me in a conversation we had a few months before she died. In October 2005, my mom brought her down to visit my new place in Virginia. It would be her only visit there before she died in February. She really wanted to go to Mass, so we drove to the Catholic church so my mom could find out what time services were. The context surrounding Gram’s advice escapes me now, but I’m not sure it matters. My mom had gone into the church lobby for some reason and we sat alone in the car, talking.

“Why be so proud?” she said. I wish I could remember why, and I know it wasn’t directed at me, but I hear her say that at least once a week now (or any time I’m having a pride issue).

It was the first thing to come to mind as I was listening to this story on Saturday, too. I’ve been thinking about what she said a lot lately because it’s been relevant to me. For example, I know I need to go out and find a crappy job doing pretty much anything so that when November rolls around, I can actually pay my bills. I know that I need to do something that I don’t like while I’m waiting for something that I do. I know that the worst part is going to be working alongside my former students, knowing that they’ve decided I’m a joke.

But pride is holding me back, and I’ve been trying to deal with that.

It’s been interesting, too, because pride isn’t usually something I struggle with. It’s something I swallow. I can’t count how many times I’ve said or done something that scared the hell out of me because I knew, somehow, that I couldn’t be too proud not to. It had to come out. I knew what kind of reaction I’d get, but it was important for me to do it anyway.

Friends often tell me that it’s apparent in my interactions that I’m concerned about offending people, so I have a tendency to tiptoe around the subject. This is true. I don’t want anyone to think I’m a jerk. There’s a difference between honesty and being hurtful or insensitive, but the line can be very fine sometimes. I’m generally intuitive enough to recognize the line, so I try not to cross it.

And when I know I’ve reacted poorly or I’ve shut down and not dealt with something in a good way at all, I feel terrible and guilty.

Which leads to my tendency to over-apologize for myself. Friends always tell me to stop. Sometimes I don’t realize that I’m doing it. I know that if it gets to be too much, my apology is basically empty, so I try to keep it in check. I’ve been wondering lately, though, is it worse to over-apologize or never apologize at all?

When I know I’ve hurt someone, I feel awful and want to make it up to them to make things right again. I hate feeling like I’ve let them down, and I hate feeling like a bad person, which is why I almost always have to act on it. Much as I love abandoned places, I love them from afar. I don’t want to become one. There aren’t many instances where I can look at a situation and think, “None of this is my fault. That’s all someone else’s doing.” I’m not someone who has to be right about everything. Instead, I hear my Gram saying, “Why be so proud?” and I think about what part I played in all of it.

The way I see it, there aren’t many good reasons for not apologizing or accepting responsibility for yourself when you know you’ve hurt someone. There aren’t many good reasons for not acknowledging your own accountability. You’re either A.) under the impression that you never make mistakes, B.) so insensitive to everyone else that you truly don’t care, or C.) too proud. I suppose D.) a sociopath is always possible too.

I feel like, in most cases, people are just too stubborn and too proud. Instead of dealing with things, they’ll haphazardly put a tarp where a roof is needed and try to pretend the ceiling isn’t leaking, or they’ll simply let the building crumble.

The more I think about it, the more I see too much pride at the root of so many problems. We have this innate tendency to approach conflict with the mindset that, “If it’s good for me, it’s all okay. I don’t have time, interest, or energy to deal with you. I’m not concerned with your issues.” There’s no talk of compromise. We see our actions more for how they affect us as opposed to how they affect others. What would the world be like if we looked beyond ourselves and tried to find some common ground? What if we all felt comfortable enough to be open and honest and it didn’t have to be a big deal all the time?

My guess is that there would be fewer abandoned buildings going to ruin.