Sometimes I could swear to myself that I wasn’t a creative writing minor in college. I could swear to myself, in fact, that I’ve never taken a fiction-writing class in my whole life. The basic fundamentals just seem to escape me every now and again, and I’m not sure what that means. Either I’ve internalized them to the point where they’re no longer always a noticeable cognitive step for me, or I’m just a really bad writer. Okay, I suppose there could be some middle ground there.

I don’t really remember how old I was exactly when my fascination with writing started. It was pretty early, maybe somewhere around first or second grade, and it began simply as a love of creating something. Even if I just wrote a bunch of nonsense or someone else’s song lyrics down on paper, I was already moving in that direction. And I did it because, at least on some level, I recognized that I wanted to emulate the people who wrote the books that I loved so much.

If you could have seen me as a small child and how excited I got to go to the bookstore or take a walk to the library, you would not at all be surprised that I get excited about these same things as an adult (I’ve just maybe mellowed out a little bit about them. Maybe). The fact that I will sit down on the floor and agonize over which book or books to choose is another habit I’ve been cultivating since early childhood.

And these days, when I’m feeling particularly crafty, I’ll even convince my mother that she should buy a new book for me — you know, just for nostalgia’s sake.

But what I got from these books was an understanding of how writing works, and from that, a desire to do it myself. Reading and writing are inextricably linked that way — at least for most people. And it’s funny how it works, too. Not all readers are writers, but all writers are readers (at least in my experience).

These are basic lessons you learn in Intro to Creative Writing. You learn how to take a piece of writing and look at how it was crafted. For some, this ruins or at least tarnishes the reading experience. For most, this makes reading more interesting because there’s an extra layer of something to appreciate. Not only am I learning about whatever’s in the book, but I’m learning about writing at the same time. After a while, you learn to internalize these lessons and keep reading. Usually I have little to no problem with it.

I’m in the last 50 pages of Straight Man by Richard Russo, and it’s a fantastic, clever, and funny book (aside from David Sedaris, I can’t remember the last time I laughed this much out loud at a book). But what drew me to it is the same thing that’s making it really difficult for me to read it — the same thing that’s making me over-read it. It’s based on the town right next to where I grew up. 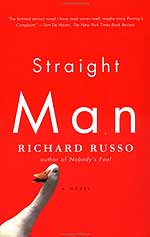 See, back in the early 80s, when my mom was a student at Penn State Altoona, Richard Russo was an English teacher there. In the book, the campus becomes West Central Pennsylvania University (part of a larger university system with its own Old Main). The city of Altoona, which is steeped in railroad history and boasts its own Railroader’s Museum, becomes Railton. All of the descriptions in the book are such a thinly veiled account of Altoona that I have a difficult time separating reality from fiction. During a key scene in the book where the main character — an English professor — stands on the bank of the university pond and has … an interaction … with the ducks and geese there, I could picture not only exactly where he was standing, but what the ducks and geese looked like, and how there are always bits of food on the ground because people feed the ducks popcorn and bread. I knew what every building around him looked like. I didn’t go to college there, but I’ve stood in that exact same spot.

I kept reminding myself that it’s a work of fiction, that I shouldn’t read too much into it. But I just wouldn’t let it go. Anything I didn’t know to be true, I simply refused to settle on as being made up.

So I read a scene where he describes the steel beams of a new building that’s under construction. “Hey mom,” I asked. “Did they build any new buildings on campus when you were there?”

“Yeah. The Theatre and Arts Building. Why?”

“No reason.” I put my nose back in the book.

The main character keeps thinking about this guy who laid down on the train tracks and committed suicide by decapitation.

“Hey dad,” I asked, nonchalantly. “Did anyone ever commit suicide by lying down on the train tracks in Altoona?”

“Oh, yeah. That was a while back. Except it actually happened in Hollidaysburg.” He didn’t ask why I wanted to know this.

Finally I told my parents that I was reading this book and that’s why I wanted to know so much. I just couldn’t let fiction be fiction. I couldn’t take that Intro to Creative Writing lesson of “Write What You Know” and just let Richard Russo use it.

And my parents, for their part, became total enablers. One day I described a series of turns in the character’s commute to my dad, and we sat and tried to figure out where, exactly, his house was located.

WHEN DOES THIS MADNESS STOP!?

When you live in the most boring place on earth, it’s not common to find a book that’s written about it. Even loosely (and I wouldn’t at all say this book is “loosely” based on Altoona. It IS Altoona). It’s almost like watching the movie before you read the book. Instead of the ability to create and conjure up images in your mind, the movie just tells you what things should look like. I can’t create other images for this book because I know what it looks like.

So now I’ve been trying to turn it into a lesson. I’ve been trying to examine the ways Russo took the truth and bent it because I have the advantage of being able to recognize that. It’s all based on assumptions, sure, but I can see where he took the name of a town that’s about an hour away, changed two of the letters, and made it the next town over (my town? who knows). I can see how he plays with details to alter reality, and that’s really interesting.

By the time I got to Part II, I was no longer interested in making a concrete list of fact vs. fiction (except for double-checking to make sure that no one actually threatened to kill a duck a day until the budget came through). By Part II, I was paying attention to these descriptions, because if we are, indeed, supposed to write what we know, then that lesson is kind of a personal goldmine.

4 thoughts on “An Inadvertent Writing Lesson”