There are certain things throughout the course of writing this blog that seem to come up again and again. Though I try not to beat things to death, I’m sure I’ve repeated myself more than once. While I try to not broach subjects that could potentially cause a lot of controversy, there are times when I need to write it out because I feel like my brain is on fire.

This is one of those times.

On Tuesday, my governor announced unprecedented cuts in funding to public education, and try as I might, I can’t find any sense in it. In fact, like many, I’m sure, I’m pretty enraged about it. Sure, I could keep these thoughts to myself, but I suppose I’m also curious to see if anyone can tell me why this makes sense.

Our last governor claimed to be attempting to lower tuition rates. It didn’t work. The new governor says that we need a “new model” for lowering them. His answer was to slash over one billion dollars in funding to education (broken up so that public schools lose $589.8 million dollars and the rest comes out of higher ed. allocation). Correct me if I’m wrong, but when state and state-affiliated universities don’t get the money they need — and for some of them, including Penn State University, 50%+ of their funding has just been eliminated — will that not lead the schools to raise tuition in order to meet costs?

And when those tuition costs go up, will that not mean that many students will find it impossible to afford college or decide that the massive loans they will have to take out are simply not worth it? And how will a lack of a college degree fare for them in this kind of economy? After two years, I consider myself something of a seasoned pro at job-searching, and I can say with no hesitation that a college degree is still preferred.

The cuts also mean that programs and services that were offered to students for free or at a low cost will likely be either eliminated altogether or the costs will increase.

Penn State, which operates 24 satellite campuses around Pennsylvania, has already begun talking about which of their branch campuses might have to be closed. Sure, that’s maybe not the worst case scenario, closing down some of the smaller ones seeing as how there are so many, but does that not still eliminate a decent amount of jobs? And what about the students who attend those campuses? Not all of them are going to be able to commute to the next-closest location. A lot of commuters are working parents and don’t have that kind of time. They need something close by.

And though rumors have been predictably denied, there is speculation about other universities that could close.

Then we come to the K-12 realm of public education.

I spent my whole life, quite literally, working to become a teacher. It was always the thing I wanted to do more than anything else, even during my senior year of high school when my AP English teacher would say to me on a regular basis, “You don’t want to do this. Don’t become a teacher. Why do you want to do this again?” But I did it anyway. And it was great while it lasted. I had three good years in before a pay freeze meant that I wasn’t going to be able to afford to live where I was. With no teacher unions in Virginia, no one could advocate for us. The county couldn’t say when that pay freeze would end. They couldn’t put a cap on it. I left at the end of the 2007-08 school year. My friends who remain in the county are still under the same pay freeze that was enforced when I left. The last thing I heard about the pay freeze was that the earliest it would be lifted is 2013. And now they have furlough days built into their school year, too.

I got one more year of temporary full-time teaching in before the economy seriously tanked. It was at my home district and can be described as tumultuous at best. Now I sub.

Though I’ve long since started pursuing employment in other areas outside education, part of me held on to the tiniest hope that I would be able to find a teaching job again, that I wouldn’t feel like roughly 22 years of my life and however many thousands of dollars were wasted. I think that the reason the public education cuts make me so angry is because I’m forced to watch that dream shattering all around me (I should call every radio station in Harrisburg and request some Johnny Hates Jazz to be dedicated to old Tom).

My home district, though extremely economically diverse, is one of the most well-to-do in the county. The education cuts would eliminate 28% of our funds here, and according to the superintendent, that’s going to mean that vacancies won’t be filled and layoffs are a very real possibility. If that’s what happens to a district that’s well-off, what happens to smaller districts with less money in their funds?

People are always criticizing teachers for “pretending it’s about the students” (because not caring about students is a good reason to become a teacher), using the “excuse” that funding can’t be cut because class sizes would be too large. They call these teachers lazy. I call these people cowards. I’ve invited all kinds of people to come into my classroom to see how difficult it can be. Only once did someone take me up on it. A parent came in and sat down right next to his wide-eyed son. The son gave me no problems for the rest of the year. At the end of the class, the parent came up to me and said, “I really don’t know how you do this. You need about 30 sets of eyes and the ability to be in several places at once.” And that’s the truth.

Fun Fact! Tommy Boy taught 9th grade for one year. Just one. I’d be really interested to see why he stopped. Was it because he was so super successful and put all other teachers to shame? Or was he using it as a “fall-back career” until he could move on to something better? I have no problem with teachers who go into law. I had a wonderful teacher who is a lawyer now (and I’m not just saying that because he might be reading this), but he also taught for more than one year. I have a problem with someone who teaches for one year, goes into law, and decides to use it to treat students and teachers like they don’t matter at all.

Last week on the Daily Show, Jon Stewart hosted Diane Ravitch. Stewart made an excellent point that people are really going after teachers, but “there’s bad EVERYTHING.” There are bad salesmen and bad secretaries. There are bad underwriters and bad CEOs. No one goes after them and tries to strip them of everything. Are there bad teachers? Sure. But there aren’t nearly as many as this three-ring media circus would have you believe. And anyway, you’d be surprised how a change of conditions can make a “bad” teacher “good.” A lot of it is relative. Not that tenure is without its faults, but I don’t think of it as a way to protect “bad” teachers at all. People who see it that way and say that getting rid of it is a great idea because it will somehow magically solve all those “bad teacher” problems irritate me and I’m inclined to want to introduce a pair of steel-toed boots to their kneecaps. Especially when they know little to nothing about education.

I won’t go into my thoughts on test scores and all of that nonsense, except to say that parents and especially students need to be held accountable, too. I can teach a lesson brilliantly, but if a student doesn’t want to study and pay attention, they’re not going to do well on those standardized tests. Then I’m going to be punished for it. That doesn’t do a lot to boost my morale. Neither does having 35-40 kids in a classroom. Do you know how difficult it is to manage that many kids at once by yourself? I would lose my voice sometimes just trying to keep 30 kids under control…5 separate times a day. Does that make me a bad teacher because I’m only one person whose voice is only so loud? Does it make me a bad teacher because kids are frighteningly unafraid of discipline these days? They’re concerned with themselves. You think they care if I get in trouble because they failed state tests? Nope.

But all of that is going to happen with these cuts. There will be fewer teachers and bigger class sizes. I have a number of former students who are now in college studying to become teachers. I have a number of former students heading off to college in the fall who have told me they’re pursuing teaching certifications. Part of me is holding on to hope for them that this will all somehow be better by the time they come out (if their schools aren’t closed and they can afford to finish). Part of me feels guilty about another part of me that wonders if it’s not naiveté that’s not forced them to run screaming yet.

Before I get to the cherry on top of all of this, let’s recap: 1 billion dollars cut = detrimental cuts in programming and staffing = lots and LOTS of university and public school employees without jobs = bigger class sizes, less attention per students,  and (where applicable) higher tuition.

The cherry on top of this is, of course, Marcellus Shale. The governor flat-out refuses to tax gas that’s being drilled from it. He’s said that Marcellus Shale creates jobs, but I hardly think that it creates an equal or greater number of jobs than those that will be lost due to the crippling slash in public education funding. He’s quoted as saying, “Let’s make Pennsylvania the Texas of the natural gas boom.”

That’s right, we’re sacrificing jobs and killing public education for….. gas. Gas that will be there whether it’s taxed or not, unlike the teachers, who without pay, may not have jobs. Devastating.

I can’t understand how any of this makes sense except to serve some kind of personal agenda maybe. Education affects everyone. Without it, no one would be where they are today, including Mr. Corbett. To cut funding in such a profound way is irrational. I am ashamed that my state’s elected officials value natural gas over the future of our students and the quality of their education. 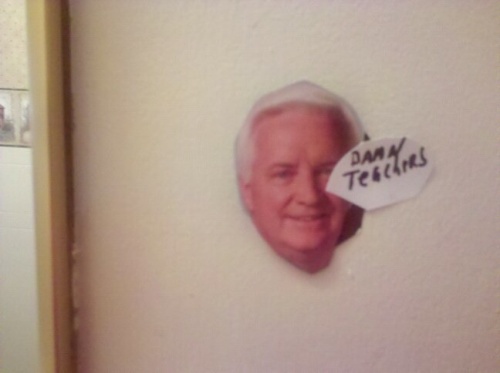 My dad hung this on my bedroom door in October. I moved it next to the bathroom mirror where it still resides today. He did it as a joke to annoy me. It's funny 'cause it's true.

One thought on “Things That Don’t Make Sense”