As the oldest of three children whose parents were both working commuters during their college days, I didn’t get much in the way of advice when it came time to pack up and set off for life on campus. Now that it’s been five years since I graduated and nine since I began college, the Person I’ve Become often wishes I could go back and smack some sense into the Person I Was…or at least impart some wisdom.

Loosen your grip on high school, dear freshman self (and dear freshmen everywhere). You will form stronger friendships with people in college if you accept that this is your life now. Not that there’s anything wrong with your high school friends, but your bond will slowly start to weaken with many of your old friends because high school just doesn’t allow you to foster friendships in the same way that college does. Five years out, and I’m still closer to my best friends from college than I ever was to anyone in high school. My first night at Susquehanna, while my roommate and the girls next door all went to an ice cream social to mingle, I opted to stay in my room, hanging up pictures of my high school friends and chatting with them on AIM. It wasn’t worth it. I should have gone out more and socialized.

9/11 happened on my 18th day of college. It was the first true bonding experience that I had with several of my new friends. While I hope it never takes something of this magnitude to bring people together, when I think about my first few weeks at school, I inevitably think about four or five of us clustered around a tiny TV, unwilling to pry ourselves away. If there’s a lesson to be learned from this, it’s to not be afraid to let people see you be vulnerable. A lot of us were scared – we were in a new place with new people and suddenly our country was under attack – but showing our vulnerability allowed us to be real with each other, and that’s one of the best ways to make friends, in my opinion.

Living with someone in such a small space is not always easy, especially if you’ve been fortunate enough to grow up with your own bedroom (I was not). Everyone needs some personal space, so don’t be afraid to be open with your roommate. Living with your closest friends isn’t always the best idea either. Though we’d attended different high schools, I knew my first roommate before coming to college, and after two years together, we made the decision to go our separate ways (before we killed each other). As soon as we weren’t in each other’s faces all the time, we became better friends and started having fun again. She’s still one of my favorite people and best friends today.

Find what interests you. College is a place to learn academics, but it’s also a place to learn about yourself, and many times the two will overlap. Take classes outside your major if they sound interesting to you. Get involved with something you’ve never done before. I waited until my sophomore year to start joining, but before then it had never occurred to me that I could be a newspaper photographer or a DJ on the radio. I’d never realized that I had such a passion for tutoring or such an interest in library science. I came to college with a dream of becoming a teacher and I made that happen, but I found some other interests along the way. That being said, it’s not always the case for everyone. If your life’s dream was to become a doctor and you get to college and realize you’d be happier being a teacher, be a teacher. Sure, people will tell you you’re making a mistake, but ultimately it’s your life. You’re at college to prepare for your future, so do what makes you happy. Making money isn’t everything if you’d rather be doing something else.

You are not Superman or Wonder Woman, so don’t be afraid to ask for help when you need it. Your professors have office hours, tutoring centers and other academic support systems are in place, and everyone is coming into college with a different background. No one expects you to know everything. If they did, what would be the point of higher education? Sometimes you just can’t make everything work. During a particularly difficult semester for me on a personal level my junior year, I had a calculus teacher who was absolutely impossible (and very unhelpful) and who caused me to have regular panic attacks (I was an English major; math isn’t my thing). I went to the Dean of Students to find out if there was any way I could drop this class even though I’d missed the Drop/Add period. While there wasn’t a way for me to do that, she helped me to realize that keeping one’s sanity intact is most important. I went to my calc teacher the next day and told her that I wasn’t coming back to class. I now have one glaring F on my transcript, but I don’t regret that decision for a second.

Finally, I wish someone had told me how fast four years go by. You blink and you’re already back home for your first summer break (those long four months), but as soon as you get there, you realize you’re a little bit different than you were a year ago. You shut your eyes for a minute and you’re graduating and being tossed out into the real world. Study hard, laugh harder, and sleep on your side if you’ve had too many drinks. Be sure to make those years count and enjoy the ride because it happens so fast and it changes you.

As for me…well, I wish I’d taken more pictures.

Celebrating Christmas in my dorm room with my friends freshman year (Dec. 2001). 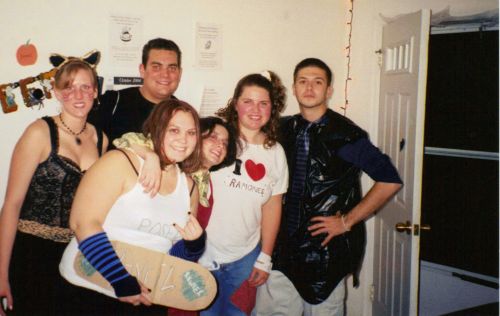 Halloween party at our place with some friends senior year (Oct. 2004)

Me with my grandparents on Graduation Day. I would probably also advise myself to discover eyeliner a little sooner (May 2005).